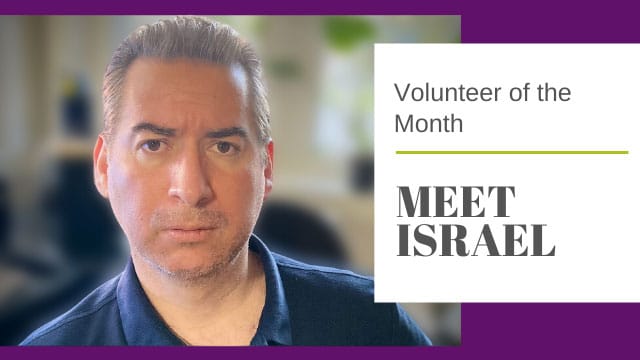 Meet Israel. He is a volunteer at CIWA’s Cross Cultural Parenting Program and September’s Volunteer of the Month.

Israel Rodriguez Miralles was born and raised in Mexico. He, along with his wife and two children, moved to Canada in 2016. They lived in Montreal for 2 years before settling in Calgary. Israel earned a Bachelor’s Degree in Law after which he taught Law, as well as English and French. Israel is currently working towards becoming an Immigration Consultant.

Israel thrives on spending time with his family. He says doing things with his children is his favourite hobby. He also enjoys reading books on social sciences and playing the guitar.

Israel developed a keen interest in CIWA when his wife became a client. He was grateful for the support she received and wanted to be involved in a place whose focus was to support women through equipping and empowering them. He wanted to do something valuable and knew volunteering was the perfect way to accomplish that goal. Israel says the number one reason he volunteers is to honour his Mom who struggled to raise her family as a lone parent.

Israel’s soft heart towards helping vulnerable women shines through as he talks about his volunteer experiences with CIWA. He wasn’t entirely sure what to expect or how he could support but he just knew he had to act and do something. He is a beautiful example of dedication and commitment to supporting vulnerable immigrant women. Volunteering has given him a wider perspective on the needs of immigrant women as he has learned the things they struggle with along with what they have to offer.

Israel thoroughly enjoys doing mock interviews as it gives him a chance to hear women’s stories, achievements, along with their hopes and dreams. He enjoys learning their stories and giving them tools to help them achieve their goals.

He also appreciates that he’s been able to learn a lot about parenting in Canada and the challenges parents face with their young families after moving to Canada. Israel says his background in law sometimes proves to be of assistance to clients who use his interpretation services. He knows the importance of impartiality as a volunteer and gets to see things from the side of someone in need of support as well as from the side of the law.

Through volunteering Israel says he has become better communicator and learned the importance of removing biases. People walk through many challenging and difficult circumstances and offering caring support is of utmost importance as everyone deserves to be treated with dignity and respect.

Staff laud him for the commitment, dedication, punctuality, compassion, and integrity he pours into his volunteer roles. He takes great initiative and has proven to be very helpful by providing regular updates with CIWA staff as well as reaching out to connect with CIWA clients.

Thank you, Israel, for selfless commitment to volunteering and supporting newcomer women at CIWA!

Do you want to volunteer at CIWA? Click here.