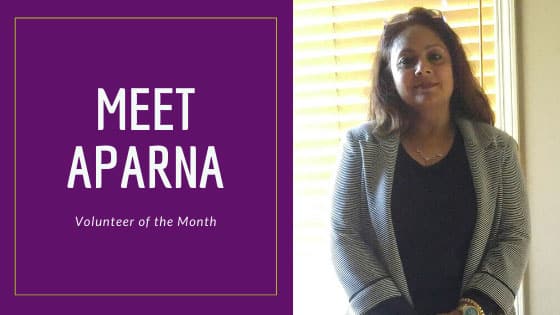 Meet Aparna. She is July’s Volunteer of the Month and now a proud member of the CIWA team.

Aparna learned about CIWA’s Labour Market Bridging for Volunteers – Interpretation Translation Program and was delighted when a spot opened up for her to enroll. She successfully graduated from the program in 2012.

Since then, she has volunteered in multiple capacities at CIWA. She has supported Cross Cultural Parenting Program workshops, CIWA’s Casino night, and currently, she volunteers with the Volunteer Program office as well provides translation and interpretation support to CIWA clients. As an interpreter, she travels around the city in order to support clients at various appointments from doctors and schools to legal matters. For several years, she has continued to provide irreplaceable facilitation and administrative support for the monthly Interpretation and Translation Volunteer Training sessions.

When Aparna first began volunteering with CIWA, she became very ill; it took a while but eventually she was diagnosed with an auto-immune disorder. This was a very low point in her life as she encountered many struggles which included low energy, limited availability, and not being able to keep active.

“The Volunteer Program staff were incredibly supportive and caring towards me at this time.”
The feeling of being appreciated and knowing she had a support system in place was what kept her going and helped her rise up and overcome her illness.
“I feel empowered and I see other women being empowered as well because of the work CIWA does. I appreciate how CIWA targets supportive services to clients based on their needs and/or skills.”
Through volunteering Aparna’s confidence has grown substantially. She has learned a great deal in both her personal and professional life. She is grateful to be in a place where she is learning valuable skills that relate directly to her employment goals. Not only has she grown but she also gets to witness and be a part of the growth of CIWA clients. CIWA exudes empowerment as they tailor services towards the clients’ skills and needs. Each time she volunteers, she is inspired and knows she is doing something meaningful.
“CIWA helped teach me Canadian workplace culture and I am thankful to be a part of a beautiful professional institution.”

Staff credit Aparna with being an excellent listener with a big heart. Staff love working with her because she is extremely cooperative, reliable, friendly, and professional. She is a vital team member who brings great ideas and ensures the absolute success of the services she provides.

She has established herself in the interpretation profession with great success. As a certified interpreter and translator, Aparna knows very well what is necessary to do a successful interpretation session. Her commitment to CIWA’s clients is crystal clear and she is one of our very best—to the point that she has become one of our trainers and now one of our CIWA staff!

Her hobbies include gardening, cooking, and she greatly enjoys keeping physically active through Zumba and yoga classes, as well as playing tennis.

Congratulations Aparna on being volunteer of the month for July 2020!