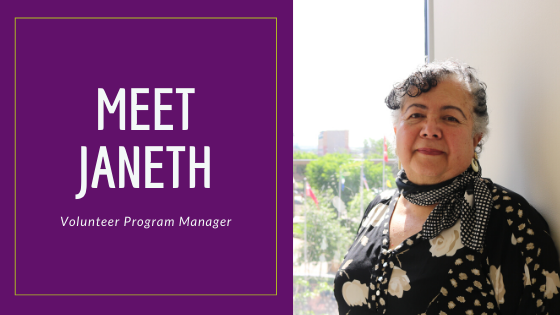 Meet Janeth. She is CIWA's Volunteer Program Manager and, as of today, is celebrating 30 years with CIWA!

Janeth came from Guatemala bringing with her a BA in Latin-American literature. She was a high school teacher before moving to Canada in 1985. She landed in Toronto and worked multiple jobs including childcare, family support coordinator, and volunteer coordinator.

Over the 30 years, Janeth has seen CIWA grow and change. She started at CIWA when there were only 7 employees and 49 volunteers. She initially became involved with CIWA as a group participant of the Making Changes program in 1989. She was hired later that year as CIWA’s Volunteer Program Coordinator and in 2006 became the Volunteer Program Manager.

She is proud to be part of an organization that supports all immigrant women. She loves her job as she learns about different cultures and sees volunteers grow, gain confidence, and make connections in the community.

Outside of work, Janeth enjoys traveling, visiting her family, as well as spending time with her friends and grandchildren.

Keep up-to-date With CIWA, sign up for our Newsletter